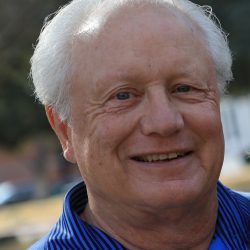 Author, Medicine at a Crossroads

Michael Attas, MDiv, MD, didn’t choose medicine so much as it chose him.

He was a football player and Psychology student at Baylor University when he applied for a summer job at Baylor College of Medicine. At the time, the college was looking for a student to research the cause of mysterious “mumps” appearing on patients following open heart surgery, and Attas was looking for a way out of a construction job that was planned for that summer. He had no background or interest in medicine, but because no one else applied, he got the job.

Not only did Attas discover the cause of the temporary condition; his findings were published in a national medical journal that fall. His medical intuition caught the attention of renowned heart surgeon Dr. Denton Cooley, who put his hand on Attas’ shoulder on the last day of the job and said, “Mike, you have a gift. Go to medical school.”

So he did. It was the start of a prominent and fulfilling career in medicine for Dr. Attas.

With a bachelor of science in psychology under his belt, he went on to earn his medical degree from The University of Texas Medical Branch in Galveston. He completed his residency and fellowship training at the University of Kentucky Medical Center where he also served as Chief Resident in the Department of Medicine and Senior Cardiology Fellow.

Alongside his career in medicine, Dr. Attas earned a Master of Divinity with an emphasis in ethics and moral theology from the Episcopal Theological Seminary of the Southwest. He was an ordained priest and served as an assisting priest at St. Paul’s Episcopal Church in Waco, Texas. He also served on the Board of Trustees of the Seminary of the Southwest and the Episcopal Health Foundation.

In 1999, Dr. Attas combined his passions for medicine and divinity to found and direct the Medical Humanities program at Baylor University, which offers a bachelor of arts for undergraduate pre-medical students. It is designed to foster an understanding of the spiritual, ethical, economic, and literary aspects of health care. The program was the first of its kind in the nation, and it continues to pave the way for other universities.

His latest release, “Medicine at a Crossroads” (Stellar Communications Houston, 2018), is a collection of revised and expanded articles that was originally written as a bi-weekly column on contemporary healthcare issues for the Waco Tribune-Herald (2009-2011). His first book, “Fly-Fishing—The Sacred Art” (SkyLight Paths Publishing, 2012), was co-authored with Rabbi Eric Eisenkramer to share lessons from fly-fishing on reflection, solitude, community, and the search for the Divine. He is also the author of several articles published in various medical journals and reviews.

Today, Dr. Attas is immensely enjoying retirement with his wife, Gail. He is no longer active in ministry, devoting his time instead to traveling and fly-fishing. He has three adult children: Jason, Jessica, and Amanda.

Dr. Attas is available for consulting and public speaking engagements for hospitals, health systems, and corporate boards involved with the healthcare industry and sector. You can reach him at michael_attas@msn.com.